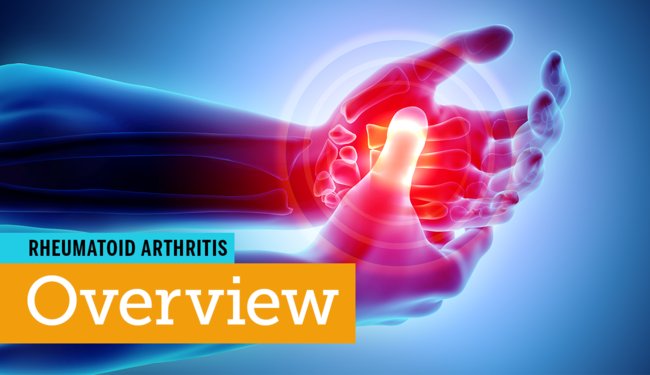 Rheumatoid arthritis (RA) is an inflammatory autoimmune condition in which the body’s immune system attacks the joints, resulting in pain, swelling, and deformity. RA is chronic — there is currently no cure.

What Is Rheumatoid Arthritis?

Rheumatoid arthritis is an autoimmune disorder in which the immune system mistakenly attacks the joints in the same way that the immune system normally would fight viruses or bacteria. In other words, the joint damage in RA is caused by the body’s immune system, most commonly those of the hands, feet, wrists, elbows, ankles, and knees. With RA, damage is typically symmetrical — when a joint is impacted, it tends to be on both sides of the body. For instance, both knees or both ankles are usually affected.

The cause of RA is unknown, although it likely involves both hereditary and environmental risk factors. Environmental factors, such as cigarette smoking and obesity, increase the risk of developing RA. Read more about the causes of RA.

The History of Rheumatoid Arthritis

People have had rheumatoid arthritis since the early days of recorded history. As early as 1500 B.C., a disease similar to RA was described in the Ebers Papyrus, an ancient Egyptian scroll documenting knowledge of medical herbs. RA has been discovered in Egyptian mummies, discussed in Indian literature dating as far back as 300 B.C., and identified in the subjects of early paintings. The term "rheumatismus," meaning “to suffer from a flux,” was mentioned by famed Greek physician Galen sometime in the second century of the common era. In the Western world, bloodletting and leeches were popular treatments for RA. In the East, acupuncture was used. At least two ancient treatments — gold compounds and willow bark (which contains the active compound in Aspirin) — are effective and continue to be used today.

In 1819, English surgeon Sir Benjamin Collins Brodie described how RA affects the joints and tendons, as well as the progressive nature of the disease. The term rheumatoid arthritis was first mentioned by Archibald Garrod in "Treatise on Rheumatism and Rheumatoid Arthritis" written in 1890.

Early in the 20th century, rheumatoid arthritis was believed to be caused by an infection. Gold compounds and sulfa drugs were the mainstays of treatment during this period. Acetylsalicylic acid was isolated from willow bark and marketed as Aspirin in the early 1900s, followed later in the century by other nonsteroidal anti-inflammatory drugs (NSAIDs), such as Ibuprofen. Disease-modifying treatments came into use in 1938, when Sulfasalazine was formulated to treat RA. Methotrexate and corticosteroids became common treatments for RA in the 1980s. Other 20th century breakthroughs include research proving RA is an autoimmune disease and the identification of a genetic component. Anti-tumor necrosis factor drugs (or anti-TNFs), also known as biologics, first became available in the 1990s, and new biologics continue to be created.

How Common Is Rheumatoid Arthritis?

What Are Symptoms of Rheumatoid Arthritis?

Rheumatoid arthritis affects each person a little differently. Symptoms depend on the stage of the condition and can appear or disappear at any time. Symptoms generally focus on the joints and tend to occur symmetrically, on both sides of the body. Symptoms worsen during disease exacerbations (also called flares) and may subside during periods of remission.

The most common symptoms of RA include swollen, stiff, painful joints; joint damage; and limited mobility. Morning stiffness, fatigue, and inflammation in other parts of the body — especially the eyes, mouth, blood vessels, and lungs — are also typical in cases of RA. Many people with RA experience weight loss and depression, which is common in people living with any type of chronic illnesses. Read more about rheumatoid arthritis symptoms.

Diagnosis and Types of Rheumatoid Arthritis

As part of the evaluation for rheumatoid arthritis, blood tests are conducted to check for anti-cyclic citrullinated peptide (anti-CCP). Around 60 percent to 80 percent of people diagnosed with RA test positive for anti-CCP, an antibody (protein made by the immune system) that attacks the joints. Presence of anti-CCP leads to a classification of seropositive RA. A negative result leads to a diagnosis of seronegative RA, which is often a milder form of the disease.

Your blood may also be tested for the presence of rheumatoid factor, another autoantibody. Since rheumatoid factor may also be found in the blood of those with other rheumatic diseases or unrelated conditions, it is less reliable as a diagnostic criterion. The presence of elevated C-reactive protein (CRP) or erythrocyte sedimentation rate (ESR) in the blood indicates inflammation, and may support a diagnosis of RA or another autoimmune condition, such as psoriatic arthritis.

If RA is suspected, the doctor may perform a physical exam to check for the presence of synovitis (joint inflammation) and rheumatoid nodules, and order X-rays to assess joint damage.

When children are diagnosed with RA, it is called juvenile RA or juvenile idiopathic arthritis. Juvenile RA may or may not disappear as the child grows up.

Read more about types of RA.

Rheumatoid arthritis is commonly diagnosed and treated by a rheumatologist. RA can also be treated by an internal medicine specialist.

Treatment of rheumatoid arthritis is typically aimed at modulating the immune system to calm inflammation, reduce autoimmune attacks on the joints, and ease symptoms (such as pain and swelling) while avoiding side effects. Some RA treatment options are taken orally, while others are administered by injection.

Mild joint pain and swelling may be relieved with over-the-counter treatments such as Ibuprofen or Aspirin. There are many classes of disease-modifying antirheumatic drugs (DMARDs) prescribed for RA that can effectively reduce disease activity and prevent damage. Surgery, such as joint replacement, can restore function when RA has caused severe joint destruction. Occupational therapy can help people with RA overcome disability and maintain mobility and function.

What Is the Prognosis for Rheumatoid Arthritis?

There is currently no cure for RA. While symptoms may appear during disease flares and subside during remission periods, RA itself does not go away. However, there are effective treatments to manage many of the symptoms of rheumatoid arthritis and to help slow progression.

Rheumatoid arthritis itself is not considered a fatal disease. However, severe RA can cause lung disease or cardiovascular complications that raise the risk of death. People living with RA also have a higher risk for developing diabetes, which can lower life expectancy.

Rheumatoid arthritis symptoms can come and go with flares. Common triggers for flares include stress, overexertion, infection, and lack of sleep.

No single diet has been proven by clinical studies to improve symptoms in everyone with RA. However, eating a healthy diet can help people with RA achieve and maintain a balanced weight, lower the risk of heart disease, and fight inflammation. Read more about diet recommendations and other rheumatoid arthritis treatments.

Kelly Crumrin is a senior editor at MyHealthTeams and leads the creation of content that educates and empowers people with chronic illnesses. Learn more about her here.