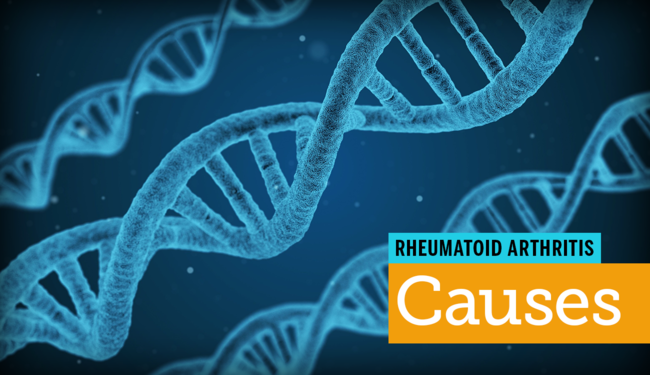 Rheumatoid arthritis (RA) is an autoimmune disease that occurs when the immune system attacks the joints in much the same way as it normally fights viruses and bacteria.

In RA, white blood cells attack the synovium, the tissue that lines the joints, causing joint pain and inflammation. Joint inflammation can lead to joint damage in RA, including the destruction of cartilage and bone and the weakening of muscles, tendons, and ligaments. RA affects multiple joints at the same time, usually symmetrically, affecting the same joints on both sides of the body.

RA is not confined to the joints — it is also a systemic disease that can cause symptoms in multiple parts of the body. Much is known about how RA attacks the body. However, scientists don’t fully understand why RA develops in some people but not others. Although the cause of RA is unknown, several hereditary and environmental risk factors have been identified.

“Pathophysiology” is a term used to describe the biological processes that cause disease. The pathophysiology of rheumatoid arthritis is not completely understood, but several underlying mechanisms of autoimmune disease have been identified.

Rheumatoid Arthritis and the Immune System

Normally, inflammation is self-limiting and stops when it is no longer needed. Chronic inflammation in RA is a self-perpetuating cycle of inflammatory cytokine release. This recurring inflammation results in the destruction of healthy joint tissue, including bone and cartilage, that can lead to joint deformities. Disease-modifying antirheumatic drugs (DMARDs) and corticosteroids are effective treatments for RA that work by stopping damage caused by chronic inflammation.

Research has found many correlations between RA and various genetic and environmental factors, as well as other diseases. However, correlation is not the same as causality.

This means that risk factors associated with RA do not necessarily cause RA, but are related to it in some way. Many risk factors for RA have been identified and are being studied, but none have been pinpointed as the cause of RA.

Research has shown that people with specific genetic markers are much more likely to be diagnosed with rheumatoid arthritis than those in the general population. While these genetic markers can be inherited, having them does not mean that you will definitely develop RA.

RA is not an inherited disease, but having a relative with RA puts you at higher risk for developing the condition. RA occurs in about 1 percent of the general population, but the risk is higher for those who have a close relative with the condition. If you have a sibling with RA, you have a 5 percent chance of developing the disease; this risk increases to 15 percent if you have an identical twin with RA.

RA is also associated with a higher risk for developing other autoimmune diseases, or rheumatic diseases, including ankylosing spondylitis, Sjögren’s syndrome, and lupus, as well as anemia (low red blood cell count or low hemoglobin).

A number of genes have been implicated in contributing to RA risk. These genes are mostly involved in making proteins that have roles in the immune system. Having certain variants, or mutations, of these genes increases your risk of developing RA.

These mutations can be inherited or they can involve new changes to genes. For instance, having specific mutations in the HLA-DRB1 gene raises your risk of developing RA and a variety of other autoimmune diseases. It is believed that mutations in this and other genes contribute to how the immune system ends up mistaking healthy tissue for diseased tissue or foreign material.

In addition to hereditary risk factors, other risk factors are associated with developing RA. Women are three times more likely to develop rheumatoid arthritis than men, according to the Centers for Disease Control and Prevention. Researchers theorize that this increased risk may be related to hormones.

Individuals with RA may have changes in disease activity during pregnancy, breastfeeding, and while taking some hormone-based contraceptives. Those who have never given birth have an increased risk for developing RA, while people who have breastfed have a decreased risk.

Studies have shown that past or present cigarette smoking significantly raises the risk of developing RA. This may be due to the body’s immune response to smoke exposure. The risk goes up with the number of cigarettes smoked per day and the number of years spent smoking. Risk remains elevated for years after someone stops smoking.

Exposure to secondhand smoke and other types of air pollution can also raise the risk of developing RA. One study indicated that people whose mothers smoked while pregnant were twice as likely to develop RA as adults.

Research indicates that obesity — defined as a body mass index (BMI) of 30 or higher — raises a person’s risk for developing RA. Research has also proved that the more overweight someone is, the more severe their RA symptoms tend to be.

Scientists attribute these findings to the fact that fat cells continually release inflammatory proteins. Thus, the more fat someone has, the higher the level of inflammation in their body. In addition, extra weight contributes to more stress on damaged joints. Studies also show that some RA medications, including biologics such as infliximab (Remicade), are up to 50 percent less likely to be effective in obese people.

Having certain infections may also be a risk factor for RA. Evidence suggests that several common viral and bacterial infections may be linked to rheumatoid arthritis. Some common viruses such as the Epstein-Barr virus (the cause of mononucleosis, or “mono”) and parvovirus B19 (the cause of fifth disease, or “slapped cheek disease”) may cause genetic changes in some people, paving the way for the development of RA. The Epstein-Barr virus is associated with many autoimmune diseases. Other research theorizes that periodontitis, or gum infections, allow bacteria to enter the bloodstream, triggering immune reactions that contribute to the onset of RA.

Rheumatoid arthritis can go into remission — a period of minimal or no symptoms which can last for months or years. During a flare, or exacerbation, current symptoms worsen and new symptoms arise. Some flares have known triggers (predictable flares), while other flares are not caused by any obvious trigger (unpredictable flares).

Symptoms of a flare can vary, but they usually involve increased pain, joint swelling, and stiffness. Doctors differ in their definitions of what constitutes a flare. Repeated flares may indicate that medication is not working and needs to be changed.

Flare triggers seem to increase inflammation and stimulate autoimmune attacks, bringing on new or worsened symptoms of rheumatoid arthritis. If you are having a flare, seek early treatment from your health care provider to reduce the long-term worsening of RA.

Flare triggers differ between people with RA, but common triggers include:

Talk to Your Doctor

If you or a loved one are living with RA and have questions about symptoms or treatments, talk to your health care provider.

Kristopher Bunting, M.D. studied chemistry and life sciences at the U.S. Military Academy, West Point, and received his doctor of medicine degree from Tulane University. Learn more about him here. Rheumatoid arthritis (RA) is an autoimmune disease that causes the body’s immune system to attack...

Are Race and Ethnicity Risk Factors in Rheumatoid Arthritis? The risk for developing rheumatoid arthritis (RA) is associated with many factors, including gene...

Are Race and Ethnicity Risk Factors in Rheumatoid Arthritis?

The risk for developing rheumatoid arthritis (RA) is associated with many factors, including gene...
read article >

Does Having Eczema Raise the Risk for Developing Rheumatoid Arthritis? If you’re living with rheumatoid arthritis (RA), you may also have a skin condition called eczema...

Does Having Eczema Raise the Risk for Developing Rheumatoid Arthritis?

If you’re living with rheumatoid arthritis (RA), you may also have a skin condition called eczema...
read article >

Do Infections Trigger the Development of Rheumatoid Arthritis? Rheumatoid arthritis (RA) is an autoimmune inflammatory arthritis that affects about 1 percent to...

Do Infections Trigger the Development of Rheumatoid Arthritis?

Rheumatoid arthritis (RA) is an autoimmune inflammatory arthritis that affects about 1 percent to...
read article >

Is Gut Health a Factor in Developing Rheumatoid Arthritis? Is Gut Health a Factor in Developing Rheumatoid Arthritis?