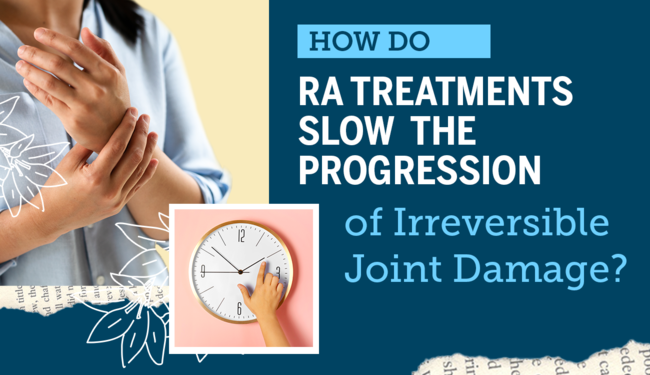 Disease-modifying antirheumatic drugs are used to treat rheumatoid arthritis (RA). They are considered disease-modifying because they can modify the course of RA, slowing disease progression, irreversible joint damage, and the accumulation of disability. DMARDs often treat RA symptoms, too.

Other types of drugs, including nonsteroidal anti-inflammatory drugs (NSAIDs) like Advil or Celebrex, can improve RA symptoms but do not modify the course of the disease or slow the progression of joint damage. While corticosteroids, such as Prednisone, can both improve RA symptoms and control the disease itself, they are used sparingly due to the side effects of long-term use.

What Are the Different Classes of DMARDs for Rheumatoid Arthritis?

Different classes of DMARDs work in different ways. First, it is important to understand a little about inflammation and how the immune system malfunctions in RA to cause symptoms and joint damage.

DMARDs work by modifying the immune system. These drugs are special because they not only decrease pain and swelling associated with rheumatoid arthritis, but they may also prevent joint damage and decrease the risk of long-term disability. While DMARDs are beneficial for treating autoimmune conditions like RA, they also leave the body more susceptible to infections.

Traditional or conventional DMARDs are commonly used as first-line therapies in treating RA. Below are examples of traditional DMARDs and brief descriptions of how they work:

Biologics are bioengineered molecules that can be designed to target specific aspects of the immune system. There are four main classes of biologics used to treat RA, including B-cell inhibitors, tumor necrosis factor alpha (TNF-ɑ) inhibitors, selective costimulation modulators, and interleukin inhibitors.

B cells are an important part of an immune system response. These cells are responsible for making antibodies, proteins produced to recognize and fight off infections. Antibodies allow us to build immunity to viruses and bacteria that cause illness. In the case of autoimmune diseases, B cells make autoantibodies that attack the body’s own healthy tissues. This eventually leads to joint damage and inflammation.

Rituxan (Rituximab) and other B-cell inhibitors work by killing B cells in the blood, which stops them from making autoantibodies and TNF-ɑ. This helps prevent the immune system from attacking the synovium in joints and lowers inflammation.

Tumor necrosis factor alpha is an inflammatory cytokine (signaling protein) responsible for causing inflammation and bone degradation in RA. TNF-ɑ is present in high levels in the joints of people with RA, where it binds to receptors on the outside of cells. Monoclonal antibodies have been developed to block TNF-ɑ. These biologics work in a few different ways.

Orencia (Abatacept) is an example of a selective costimulation modulator. It works by interrupting communication between immune cells involved in inflammation.

Interleukins (ILs) are a group of cytokines that help turn on various immune cells. Specifically, IL-1 and IL-6 contribute to inflammation in RA. Kineret (Anakinra) is an IL-1 receptor antagonist that works by blocking IL-1 binding to cells. Actemra (Tocilizumab) works similarly, blocking IL-6 from binding to cells. These inhibitors work by blocking the activation of different immune cells, which decreases overall inflammation.

The U.S. Food and Drug Administration (FDA) has approved three JAK inhibitors for the treatment of RA. One benefit of these drugs is that they specifically inhibit only JAK proteins, which helps reduce side effects and toxicity. JAK inhibitors are small-molecule drugs, which have been chemically synthesized in a lab. These drugs are taken by mouth as pills or capsules, typically once or twice a day.

Olumiant (Baricitinib) is used to treat moderate to severe RA. It works by inhibiting JAK1 and JAK2 signaling proteins. Olumiant is given to people who had an inadequate response to medications that inhibit tumor necrosis factor (TNF), such as Enbrel (Etanercept), Humira (Adalimumab), and Remicade (Infliximab).

Xeljanz (Tofacitinib) is an oral tablet used in adults to treat RA, in addition to other autoimmune diseases. It works by inhibiting JAK1, JAK2, and JAK3 signaling proteins. Xeljanz is given to people who have failed on, or are allergic to, Methotrexate.

Rinvoq (Upadacitinib) is a once-daily, extended-release tablet used to treat RA in adults. It works by inhibiting the JAK1 signaling protein. Rinvoq is given to people who do not tolerate or respond well to Methotrexate alone. It can be prescribed on its own or in combination with Methotrexate.

Several other JAK inhibitors are being studied as potential treatments for rheumatoid arthritis.

Why Is It Important To Treat Rheumatoid Arthritis With DMARDs?

Apart from improving symptoms and quality of life, DMARDs are proven to slow joint damage and disability. They work to modify the immune system, treating the cause of joint inflammation at its source. This is much more effective than simply treating the symptoms of RA, and can actually slow disease progression.

RA is not only a disease of the joints. People with RA are more likely to develop heart disease and lung disease due to the effects of autoimmune inflammation. Treating your RA with DMARDs can help reduce the risk of these complications by controlling inflammation.

DMARDs work best when you take them exactly as directed. If you have any problems obtaining or sticking with your RA treatment, discuss these challenges with your rheumatologist. If you are thinking about making changes to your RA treatment, partner with your doctor to be sure you understand all potential benefits and risks associated with each option.

If you are living with RA, you are not alone. On myRAteam, more than 137,000 others understand the challenges of life with rheumatic disease. Members often share their experiences with treatment options and offer support.

What medications have you used to treat your RA? Have any treatments improved your symptoms and your quality of life? You can share your experiences in the comments below or post on myRAteam.