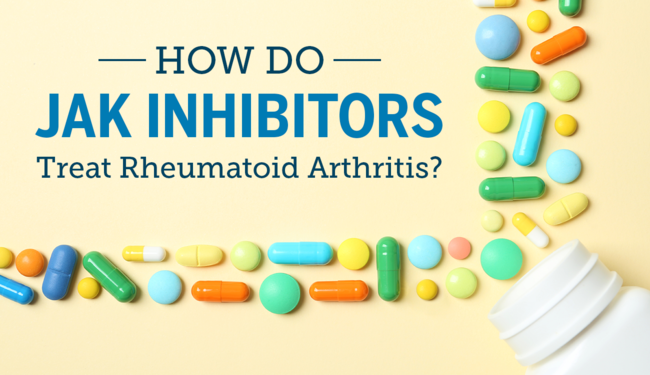 Rheumatoid arthritis (RA) is an autoimmune disease caused by an overactive immune system that attacks the lining of the joints. Janus kinase (JAK) inhibitors are one class of drugs used in the treatment of RA. These drugs work by inhibiting overactive JAK proteins in cells that cause inflammation. JAK inhibitors can help slow the disease progression and irreversible joint damage often seen in RA.

What Are JAK Inhibitors?

Janus kinase inhibitors are a newer class of disease-modifying antirheumatic drugs (DMARDs) used to treat inflammatory diseases like RA. These small-molecule drugs are available as pills or tablets that are taken by mouth. JAK inhibitors can be used alone or in combination with other DMARDs (such as methotrexate) to help control RA.

To understand how JAK inhibitors work, it’s important to learn a little about JAK proteins, the immune system, and inflammation.

The Janus family of kinases (JAK) consists of three main proteins: JAK1, JAK2, and JAK3. Kinases are responsible for relaying signals from cells to other proteins in what is known as a signaling pathway. When these proteins become overactive and signal too much, it can lead to imbalance.

JAK proteins are responsible for mediating inflammation in the body. Cytokines are messengers of inflammation which attach to their receptor on the outside of cells. When cytokines attach, JAK proteins are turned on and tell cells to make more cytokines. This creates a loop that promotes inflammation, which can be important in fighting infections.

However, this loop can be damaging in rheumatic diseases. In the case of RA, JAK signaling continues to occur and is not shut off naturally by the cells. This leads to too much inflammation and overactivation of the immune system, causing it to attack healthy tissues in the body. The joint lining, known as the synovium, is the tissue targeted in RA.

How Do JAK Inhibitors Work on Inflammation?

The U.S. Food and Drug Administration (FDA) has approved three JAK inhibitors for the treatment of RA. These include first- and second-generation drugs that have been developed to target JAK protein signaling in cells. One benefit of these drugs is that they specifically inhibit only JAK proteins, rather than the entire immune system, which helps reduce side effects and toxicity.

Xeljanz (tofacitinib) is an oral tablet used in adults to treat RA, in addition to other autoimmune diseases. It works by inhibiting JAK1, JAK2, and JAK3 signaling proteins. The tablet is taken two times a day with or without food. There is also an extended-release tablet that can be taken once daily with or without food. Xeljanz is given to people who did not respond well to — or are allergic to — methotrexate. It was approved by the FDA to treat RA in November 2012.

Olumiant (baricitinib) is a once-daily pill used to treat moderate to severe RA in adults. It works by inhibiting JAK1 and JAK2 signaling proteins. Olumiant is given to people who had an inadequate response to biologic medications that inhibit tumor necrosis factor (TNF), such as Humira (adalimumab) and Enbrel (etanercept). Olumiant was approved by the FDA to treat RA in May 2018.

Read more about how TNF inhibitors and other classes of biologics treat RA.

Filgotinib was previously tested in clinical trials as a JAK1 inhibitor for the treatment of RA. However, the FDA rejected the drug’s approval request due to concerns about toxicity and its safety profile. Clinical trials are currently underway for other second-generation JAK inhibitors used to treat RA, including Peficitinib (ASP015K) and Itacitinib.

How Effective Are JAK Inhibitors for Rheumatoid Arthritis?

JAK inhibitors have been shown to slow irreversible joint damage, similarly to other RA drugs like biologic DMARDs. In clinical trials and studies, Xeljanz and Olumiant were shown to slow the progression of structural joint damage by reducing inflammation in the lining of the joints. This effect was seen using a method known as radiographic progression. JAK inhibitors have been shown to slow the damage caused to the cartilage and bone surrounding the synovium on joints.

Unfortunately, there is currently no cure available for RA. Therefore, the overall goal of treatment is to stop inflammation or reduce it to the lowest levels possible in order to relieve symptoms and slow further joint damage. If RA continues to progress, it can lead to permanent joint damage and disability. DMARDs such as JAK inhibitors can control active rheumatoid arthritis and reduce inflammation, helping you lead a healthier life.

Read more about how DMARDs can slow the progression of joint damage.

You are not alone in living with RA. When you join myRAteam, you gain a community of more than 137,000 others who know what it’s like to live with a rheumatic disease.

Emily Wagner, M.S. holds a Master of Science in biomedical sciences with a focus in pharmacology. She is passionate about immunology, cancer biology, and molecular biology. Learn more about her here.
hug (5) like (20) comment (30)
sign up to view previous comments 1 of 30

My advise Google each drug you take read side effects

Many individuals with rheumatoid arthritis (RA) look for natural ways to help manage their...

Many individuals with rheumatoid arthritis (RA) look for natural ways to help manage their...
read article >

Rheumatoid arthritis (RA) is an inflammatory autoimmune disease that leads to joint inflammation,...

It’s normal enough to wake up achy the day after a difficult workout or a long day of work. But...

It’s normal enough to wake up achy the day after a difficult workout or a long day of work. But...
read article >

Baker’s cysts (also known as Baker cysts or popliteal cysts) are very common in people with...

Recent research in rheumatoid arthritis, an inflammatory disease, shows that what you eat may...

Recent research in rheumatoid arthritis, an inflammatory disease, shows that what you eat may...
read article >