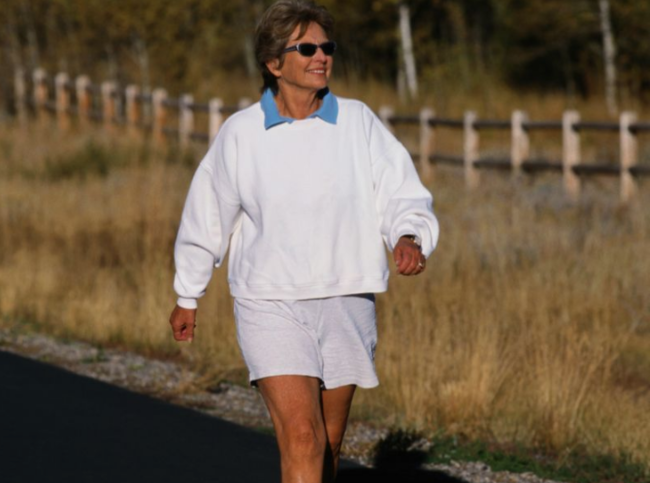 By Amy Norton, HealthDay Reporter TUESDAY, Oct. 23, 2018 (HealthDay News) -- If you suffer from knee arthritis and worry that walking will only worsen your damaged joint, a new study suggests you put your fears aside, slip on some sneakers, and take a brief but brisk walk.The researchers estimated that if older adults with the condition added just 5 minutes of brisk walking to their day, their odds of needing knee replacement surgery could dip by 16 percent.

On the other hand, light walking -- akin to a "stroll" -- may have no impact, said lead researcher Hiral Master, a Ph.D. candidate in biomechanics and movement sciences at the University of Delaware.Her team reached those conclusions by digging into data from over 1,800 older adults with knee arthritis who wore portable devices that tracked their walking intensities for at least four days.Over the next five years, 6 percent of the participants had total knee replacement surgery.The researchers used the data on people's walking habits to examine the effects of replacing "non-walking" time with time spent walking at different intensities. The findings showed that substituting just 5 minutes of down time with moderate-to-high intensity walking was linked to a 16 percent decline in the odds of needing knee replacement surgery.The study authors defined "moderate-to-high" intensity as more than 100 steps per minute. In laymen's terms, Master said, that's a "brisk" walk that gets your heart rate up -- not a stroll around the block.The findings were presented Saturday at the American College of Rheumatology's annual meeting, in Chicago. Such research should be considered preliminary until published in a peer-reviewed journal.Knee osteoarthritis develops when the cartilage cushioning the joint gradually breaks down, which can eventually result in bone scraping on bone.The condition is common among middle-aged and older Americans. According to the Arthritis Foundation, up to 13.5 percent of men and 19 percent of women aged 45 and older have knee arthritis that's severe enough to cause pain and other symptoms.And those patients often wonder whether walking is good or bad for their arthritic joints, said Dr. Paul Sufka, a rheumatologist at the University of Minnesota, in Minneapolis."They often ask whether they should minimize their activity, keep doing what they're doing, or intensify," said Sufka, who is also with the American College of Rheumatology's communications committee."The general advice we give to patients is to stay active," Sufka said. But, he added, the truth is there is too little evidence to give patients definitive recommendations.The new findings do not prove that brisk walking directly lowers the risk of needing knee replacement surgery, Sufka noted.But, "this gives us some useful information to bring to the discussion," he added.Overall, Sufka said, research does suggest it's better for people with knee arthritis to be active rather than sedentary. And that's not just for the sake of their knees. Physical activity has a range of health benefits, including lower risks of heart attack and stroke.Master agreed, and pointed out that exercise can help arthritis patients' mental well-being, as well as physical.And it doesn't take a huge lifestyle change, she explained. The new findings suggest people can benefit from adding a short, brisk walk to their day.In fact, Sufka said, such incremental shifts may be best."The best exercise program is the one you can actually stick with," he said. "If right now, you're walking around the block every day, what would be 5 percent or 10 percent more than that? You can gradually build from where you are."And what if walking is painful? That's a tricky question, Sufka acknowledged. Some patients might benefit from physical therapy rather than only exercising on their own, he said.Beyond aerobic exercise like walking, strengthening exercises for the leg muscles supporting the knees can also be helpful, he suggested.SOURCES: Hiral Master, P.T., M.P.H., Ph.D. candidate, biomechanics and movement sciences, University of Delaware, Newark, Del.; Paul Sufka, M.D., assistant residency director, internal medicine residency program, University of Minnesota, Minneapolis, and member, communications and marketing committee, American College of Rheumatology; Oct. 20, 2018 presentation, American College of Rheumatology annual meeting, ChicagoCopyright © 2018

Does your exercise regimen include walking? Share in the comments below!

Family and Friends Not Understanding RA

Study suggests most fish may play role in controlling symptoms: The most frequent fish eaters...

Medical Alert Bracelets and RA: Do You Need Alert Jewelry?

Some people living with rheumatoid arthritis (RA) wonder whether they should wear medical alert...

Medical Alert Bracelets and RA: Do You Need Alert Jewelry?

Some people living with rheumatoid arthritis (RA) wonder whether they should wear medical alert...
read article >

3 Reasons To Avoid Sugar If You Have Rheumatoid Arthritis

Some people with rheumatoid arthritis (RA) choose to limit or eliminate certain foods from their...

3 Reasons To Avoid Sugar If You Have Rheumatoid Arthritis

Some people with rheumatoid arthritis (RA) choose to limit or eliminate certain foods from their...
read article >

Collarbone Pain and RA: What It Feels Like and Tips for Managing

For people living with rheumatoid arthritis (RA), joint pain can be a common aspect of day-to-day...

Collarbone Pain and RA: What It Feels Like and Tips for Managing

For people living with rheumatoid arthritis (RA), joint pain can be a common aspect of day-to-day...
read article >

Rheumatoid arthritis (RA) can become a financial burden with expensive treatments and medical...

Kratom for Rheumatoid Arthritis: Is It Safe and Can It Help?

If you have rheumatoid arthritis (RA), you may have heard about kratom — an herbal supplement...

Kratom for Rheumatoid Arthritis: Is It Safe and Can It Help?

If you have rheumatoid arthritis (RA), you may have heard about kratom — an herbal supplement...
read article >

Can Rheumatoid Arthritis Cause Tailbone Pain?

When most people think of rheumatoid arthritis (RA), they imagine joint pain affecting the wrists...

Can Rheumatoid Arthritis Cause Tailbone Pain?